The EU are bullying the UK 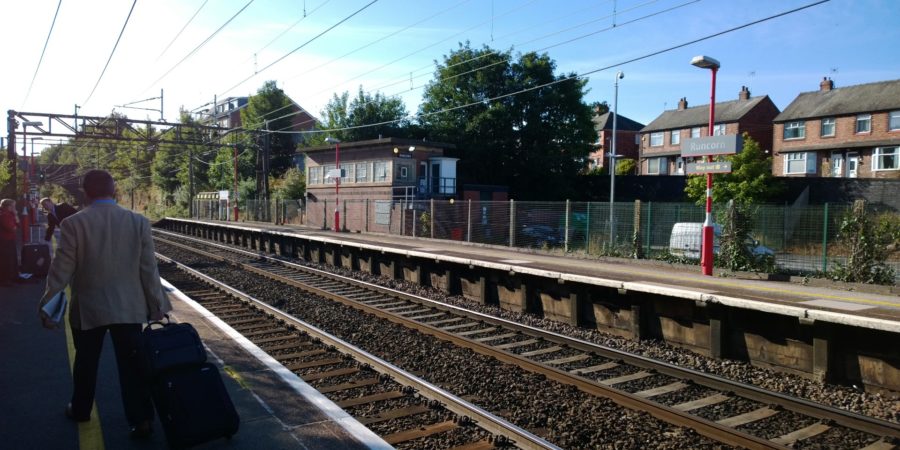 A short screenplay, by me.

It’s a Monday morning at a small train station on a mainline. It’s bustling as business travellers head to London for their week’s business. The air is cool, with people blowing little clouds of steam as they head into the station from their taxis and cars.

Mr Hock, a late-middle aged man with a red face and bumpy nose caused by years of excessive alcohol and rich food approaches the ticket office. Miss Nowak, a young Polish woman living in the UK for five years now, is behind the glass, and looks up as Mr Hock sets down his briefcase.

Miss Nowak (neutrally): Good morning. How can I help you?

Miss Nowak: That will be £193 please. Are you paying by card?

Mr Hock (with irritation): £193? I’m not travelling first class then, how much for standard class?

Miss Nowak: That *is* standard class. If you need to pay less you can travel out of peak hours. Would you like that?

Mr Hock (exasperated): That’s outrageous! How can it cost so much? I used to travel this way a lot in the eighties and it only cost £20!

Miss Nowak looks down for a moment, then regards the queue of people behind Mr Hock.

Miss Nowak: I guess things have changed. Do you want a ticket or not?

Mr Hock, squinting one eye: Why are you bullying me?

Miss Nowak (confused): What? I… no, this is just how the prices work. Do you want a ticket or not?

Mr Hock (his face reddening): Well can’t you give me a special price?! I’m a very important person you know! People in shops often negotiate you know!

Miss Nowak: I can’t do that, and look, there are other peo….

Mr Hock (interrupting): I will pay £80! Not a penny more! And it must be first class, on the next train to London as I have a very important meeting at ten o’clock and will miss out on getting a very important job if I don’t get there on time!

Miss Nowak: I’m sorry, but rules are rules and I’m not allowed to give you a discount. If you want to go to London you’ll have to try a different way. Now please pay, or go, there’s a queue.

Mr Hock, now furious, grabs his briefcase and storms away to the exit of the station. Looking at his watch, he realises that if he misses the next train he’ll be late for his meeting, and then it dawns on him! A brilliant idea! He grabs his phone and scrolls through his contacts, looking for his friend John.

Mr Hock: John? Hi John! Yes… can you hear me OK it’s a bit… yes, good… OK, remember when we used to watch Scrapheap Challenge? Great wasn’t it? Shows how easy it is to make a vehicle! I need to get to London for 10am. It’s far too long to drive, and the train company is bullying me for £193! But if we can just knock up a home made train in an hour I can make my meeting and…

John interrupted, his voice is a little distorted over a poor mobile connection: Roger? What are you on about? We can’t build a train in an hour… Scrapheap Challenge is just a show and…

Mr Hock: Poppycock! The show only ever lasted an hour and they built all sorts of wonderful machines in that time!

John: No, it doesn’t work like that. These things are carefully orchestrated to make entertainment, and in real life making a train in an hour is impossible.

Mr Hock pulls his phone away from his head and stares at it, shaking with fury, before bringing it back to his ear.

Mr Hock: I see. Well if I fail to get to the meeting, it’s YOUR fault! I’m fed up of people with a can’t do attitude! What happened to plucky English spirit eh? EH? We need to stop letting train firms bully us with their inflexibility, high costs and hatred of people like us! I am proud! I fought in two world wars and won! Well not me personally, no, John… but people like me! And we didn’t make bouncing bombs in two hour…

Mr Hock: Yes I know I saw it in a film, and it lasted two hours, it was amazing. Plucky English heroes!

John: You’ve gone mad, Roger. What are you on about? You don’t know anything about bombs or trains. It’s simply impossible. And even if you do make it, National Rail won’t just let you put it on the railway… and… why am I even bothering with this?

Mr Hock: Well it’s people like you that hold people like me back! This should be easy! John… John?

Mr Hock looks at his phone and realises John has hung up. He looks around, sees a taxi, and raises his arm. He gets in. The screen fades.

The taxi pulls up outside a scrapyard, and Mr Hock looks, optimistically, at all the materials there that he can use for his project. A large man in greasy overalls, dismantling an old car, eyes him up as he gets out of the taxi and approaches.

Mr Hock: I’d like to make a train! I have one hour. Well, fifty minutes.

The large man stares at Mr Hock, up and down, slowly, without answering. Mr Hock starts to feel uneasy.

Large man: Is this a gag or summat?

The large man starts to laugh.

Mr Hock: What? Are you one of them? Are you in cahoots with the train company? Is this a conspiracy to take away my freedom on trains?

The large man, between laughs: Fuck off!

Mr Hock turns, and gets his phone out of his pocket. He dials a number and puts it to his head.

Mr Hock: Yes, hello, is that Stephen Barclay? Well, it looks like I can’t get to London for today after all. Yes, I know I wanted the job of chief negotiator in your department… yes… I appreciate that, it’s just I have some minor things to sort out, all fixable with technology of course, and then I’ll be there… Stephen? Stephen? Hello?