Wealth, income, and why that bloke on Question Time with £80k was wrong (and right) 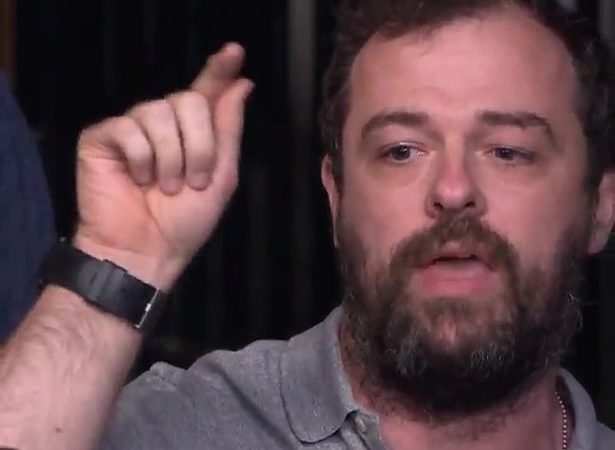 There’s a bloke who’s been on Question Time who makes £80k a year and claimed he’s not in the top 5%. Which clearly makes him a moron and a subject of derision, right? Sock it to the wealthy! They’re all bastards who need putting in their place!

Well actually, he’s not. A lot of people arguing about him are misunderstanding him. Mostly through their own equivalent ignorance.

Now, I don’t know too much about this guy, but in the way he dresses, talks and where he comes from I’ve noticed a few things.

He and I are super similar, but he got a better start in life than me. He’s even doing well as an IT consultant, like I did. And he likes racing motorbikes. I liked racing a Lotus. Both of us have good lives, relatively.

I don’t feel rich either. I know I’m richer than a lot, but I’m still poorer than a lot too. And now I’m going to explain why someone working class, like Rob Barber or myself from relatively humble backgrounds don’t get to feel (or be) as rich as Julian Middle-Class from Surrey even though our incomes may be substantially higher. Because the system is rigged against us, dear reader, and not against the wealthier middle classes.

Those of you who are working class and shouting at Mr Barber are perpetuating this. I’ll explain this over a few key thingies (it’s an official term for worked out stuff, stick with me), using graphs and stuff. I hope it helps. Today is part one, reaching thirty.

When I was 11 I went and lived with my granny. Lovely, batty lady, from a well off family, oddly enough, but had fallen on hard times through a bad choice of a first husband, deaths, and poor financial planning. We lived in a caravan. It wasn’t a pleasant experience.

I don’t know much about Rob Barber’s early life, so instead, I’ll just do a chart of my approximate wealth from childhood to the age of 30 (I’m now fifty) and, for comparison, a similar middle class person who also gets into IT and starts consulting at the age of 27. 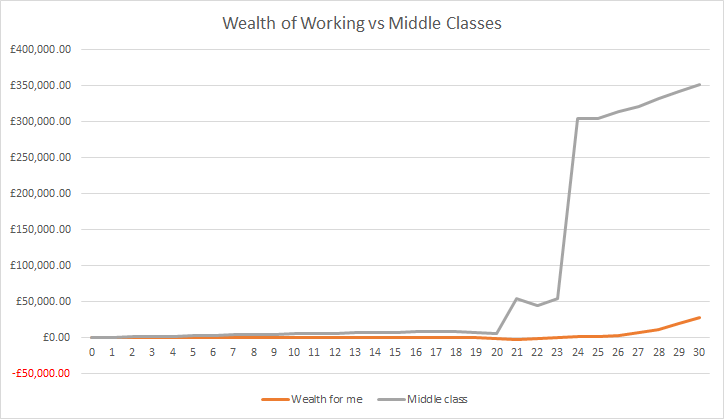 Now, let’s take a look at this hastily drawn chart.

I’m very very different to that middle class person. But why? Well, for starters, the middle class parents carefully saved £500 a year and put it into an account for their kid. I had no such luck. So by the time Julian Middle-Class was 18, he had nearly £10k saved to help him in university. I didn’t. I didn’t even have a home and my grandmother was clearly getting older and less able to look after me. I decided I should really work as soon as I finished my A-levels.

In theory that should give me an immediate advantage. But my grandmother died just a couple of weeks after I started work. There was really very little for me to inherit except a knackered piano and a broken Reliant Robin. But what I did need to do was find somewhere to live, get transport for work which wasn’t easily commutable. Thankfully I had a decent job and better income than most of my peers. Unfortunately I spent too much on consumables and partied too much. But I was in my late teens with no parental guidance, so bite me. I got into a bit of debt too, which explains the flatlining.

But at 21, Julian got an inheritance when Nana Mabel died. Only £50k in shares. Good job too as during university he’d been burning through those savings he’d acquired from his parents!

So, already, quite the difference. I’m earning and Julian isn’t, yet he’s the rich one in comparison! He’s joined the Socialist Students Revolutionary Union because he thinks he’s poor with his lack of income and the state should help him not eat into his capital. He’ll eventually turn into a Conservative. But he’s young and feels skint, so he’s all about wealth redistribution. He means income redistribution, actually, but doesn’t realise it.

On graduation from his Computer Science degree, he spends a year working in a company in London, and takes some risks because he knows that if he screws up and loses his job, he can go home to his parents. The risks pay off and he gets promoted twice in his first year!

I didn’t. I was super careful. I still cocked up, but I couldn’t afford to lose my job, and as employers in the area were generally struggling, there weren’t many options in my small northern town to choose from. I could have moved, but that felt risky.

At 22, Julian decides to buy a modest house. This flatlines his wealth a bit for a while because furniture is expensive and he needs to buy a bit, but it gets him on the property ladder. The furniture depreciates immediately, but the house starts to appreciate right away.

At age 24, Julian’s wealth suddenly spikes! Why? Because his great grandparents died within months of each other. They were very elderly, but in good health and had dodged care home costs. He and his brother got a share in a £600k house which they sold because they had an inheritance tax bill. Julian suddenly starts feeling more, well, Conservative, having seen so much money gobbled up by taxes.

At 26, finally clear of debt, I finally buy a house, cheaper than Julian’s, but about the same size because he’s near London and I’m in Widnes. So at least there I get to feel a little smug.

At 27, we both become IT consultants. Like Mr Barber.

I have a good income, but a good income also comes with some expectations. At a client’s I got the piss taken out of me for my cheap suit. At another I was mocked for my smoky old Peugeot. I bought some good suits and a Rover 600. Phew! But that meant my wealth still didn’t climb as much as Julian’s. Also, property prices aren’t rising in Widnes like they are in London’s commuter belt. So his wealth continues to outstrip mine!

Keeping the working classes down

I’m going to go off on a tangent now. I became an IT consultant not because I was desperate to do so, but because at my large corporate employer I’d kind of hit a glass ceiling. People I’d trained up had been promoted above me. I wasn’t a stellar programmer or anything, but neither were they. But they had Oxbridge degrees and I didn’t. They were on £30k and I was on £18k. I could have tried harder, but going back to Julian’s situation where he could take risks… I couldn’t. I was scared. So I was timid and overly cautious quite often. I was very anxious when on call that I didn’t screw up the payroll of the 70,000 people who depended on my decision during a call-out.

Technical people are often looked down on. It’s something graduates do for a short while on their career paths into corporate management. It sucks. At 18 I was a better coder than half the computer science graduates I interview today, but I didn’t know it then. So I was constantly scared of being found out. I thought I was blagging it compared to those with qualifications. But by the time I was 27 I was over that. I’d acquired a bit of security and stability by then.

Young Julians are currently shouting at Mr Barber, as well as actually hard up people who dream of £80k incomes! Neither should. The hard up should look to him as an example of a working class lad done good. He’s still working class, but he’s cracked the glass ceiling. Good on him! He just doesn’t understand himself very well. Not yet. Give him time.

I’m my next post I’m going to cover hidden and typically non fungible wealth. The wealth I had by the time I was 27 and didn’t even realise it.

Amazing article well done his mother who was sat next to him tried to kill herself 4 times when he was 12 due a break down in his parents marriage the poverty made him work harder than most to get out of it and live a comfortable life and to look after those who looked after him. She now lives with him and his wife and children and he pays for his dads rent on another house. He knows he’s doing well and is very grateful for his career and isn’t against raising tax but in fair way. His anger was Labour labeling him as a millionaire as they merge wealth and income together.

Hey Lewis – your comment got left in moderation limbo, but a site migration meant I spotted all sorts of things lying around that I’ve now fixed. I look after websites for a living, but neglect my own!

I’m not sure if it’s bang on but the reasoning is good. (Working class guy with a broom handle, hitting the glass ceiling)