I have a thing about the b3ta.com site. It keeps me tickled in those quiet moments. The fact they mentioned my botfly incident in their newsletter meant this site’s traffic and ranking improved a fair bit for a while, and occassionally I post answers to the question of the week spot. A couple have made it to the ‘best of’, which is nice.

And today I thought, let’s do an image for their ancient monument new uses image competition. 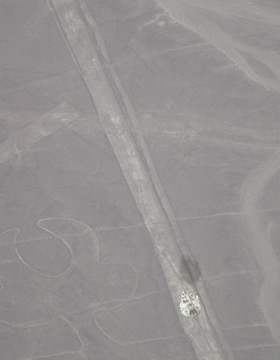 And below is a link to a desktop version of the image, if you want it.

And on the side of one hill, near the lines, is this little fella – image modded a bit to improve contrast. Sadly can’t easily see that he’s actually waving. Maybe he knew something about the lines? 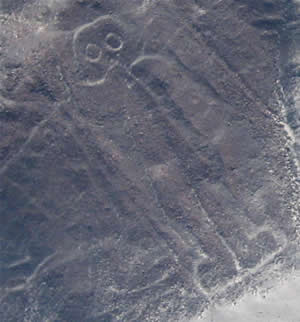 Oh, and in case you’re not a combination Star Wars/travel/geography/conspiracy geek – here’s the explanation, though it’s less interesting than working out for yourself the reasons behind the picture:

1: It’s the Nazca lines – an amazing place in the Atacama desert, in southern Peru. You can get a nutter in a light plane to make daredevil passes at ridiculous turn rates over the lines in order to get you the best views. It costs just $50 a person.
2: It’s the Millenium Falcon – Hans Solo’s space ship in Star Wars.
3: A surprising number of people think that the lines were put there as landing strips for aliens – and they do indeed look like desert runways. More likely is that the local population were into water worship and the lines relate to where water comes from. They obviously also had a fair amount of time on their hands whilst being pretty good at planning and geometry. Some of the lines would be difficult to set out with modern equipment.