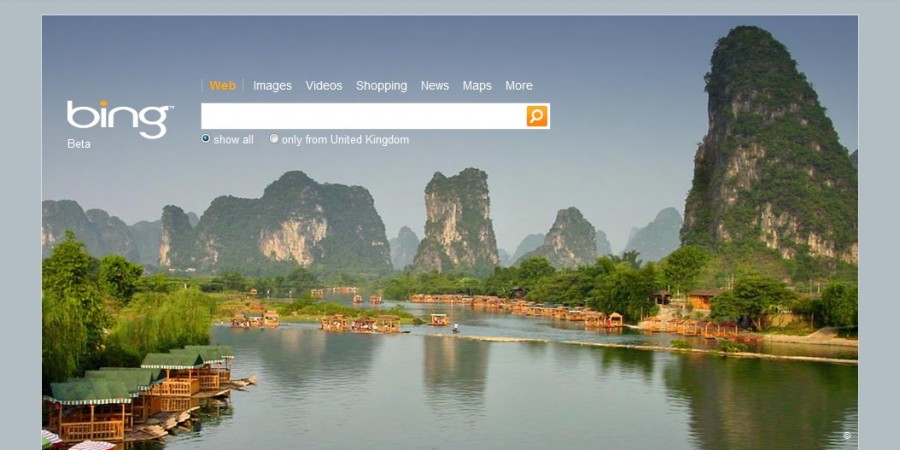 Microsoft (MS), quite frankly, gets a lot of grief in the internet world.  Sometimes it’s fair (I never like MSN, for example, from way back in the mid nineties) and often a little unfair.

But Live Search simply wasn’t up to the job.  It didn’t work well.  And I know that people that found IE defaulting to it would either work out how to change it, or simply type Google.com into the address bar.  In other words, many tried it, but it didn’t find the answers they wanted.  The algorithm has been slowly improved with time, but the damage was done.  MS knew they had to relaunch.

Bing, they felt, was the answer.  And in some ways, it’s a better and more productive tool than Google: 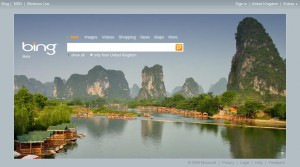 Bing - pretty pictures to cheer you up

While I’ve heard many question the function of the landing page photo, I personally really like it.  It’s attractive, well designed, and brings a little bit of beauty into the day.  You can’t sit and surf pretty images at work, so if they’re there as part of the ‘wallpaper’ of a daily tool then that’s a lift we all need.

The infinite scroll facility of the image search makes it a quicker tool to use.  Chunking of text related searches makes sense, because we can scan a page relatively slowly, but with images the human eye can scan a huge amount of visual information incredibly quickly which means that Bing’s constantly scrolling visual tool is way ahead of Google’s image search. 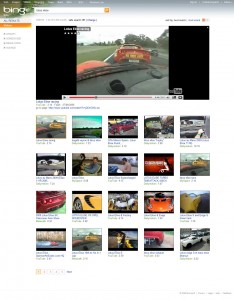 Searching for video content can often be a slow and painful process.  In Bing, when you get a series of videos up on screen you can simply hover your mouse pointer over a video to preview the first 30s and get a feel for the video, rather than visiting the site and waiting for a slow load.  The previews are poor quality, in order to get quick loading, but they’re good enough.  I feel this is one of Bing’s most effective innovations.

One thing where they may struggle is that if you click the video and that video has an embed option, you get it on the Bing site, rather than going through to the source site.  So a YouTube video search result doesn’t send you off to YouTube.  Content owners may not like this.

When you hover over a search result, you’ll see a small orange marker appear over to the right.  Hover over that and up pops a preview of the content you’re looking for.  Again, saves a wasted visit as it lets you scan a little bit of content for relevance – something that’s quicker this way than clicking on yet another unnecessary site.

Bing is, purportedly, a recursive acronym that means Bing Is Not Google.  But there’s something important in that – Microsoft is a highly profitable, focussed company that has the resources to provide an alternative to Google.  This is important – without solid competition Google will cease to innovate appropriately.  MS suffered a similar fate on the desktop – they were too dominant and rivals couldn’t compete.  Apple’s OS9 was dreadfully dated when sat next to a Windows machine of the same era, yet Windows had significant flaws.  It’s only lately with Windows 7 that MS have really started to get their act together properly – because OSX finally gave it some decent competition in certain sectors.

When you start seeing articles on how to change from Google to Bing on Firefox, you know something’s happened.

It Can Get Better

Microsoft Seadragon, with it’s deep zoom and mobile capabilities, and Photosynth technologies could be tied into the image search, for example.  As cheap processing power expands and more and more images are geotagged, this could form an astonishing visual search capability.  A shame it won’t be coupled with Google Street View – imagine what that could be like?

Search is going to become more relevant and more powerful with time.  Developers (our own Interconnect IT included) are busy creating a lot of powerful geocoded databases which will allow for some amazing mashups.  If Google and MS start fighting for dominance in this space the opportunities for users and information suppliers are vast.  Are you looking into it?