Excuse the title, but may as well make it easy to find.  I’d been experiencing problems with performance, whilst networking, with my Dell XPS M1330.

Basically, the CPU usage was spiking on a regular basis.  I could feel when playing games, and it was annoying.  It had started relatively recently, and the precise cause was unknown.  However, a bit of Googling and I found Mark Russinovich’s excellent overview of using Sysinternals Process Explorer and Kernrate to track down the root of this kind of spiky CPU usage.

And my problem was exactly the same.  Same driver, same version – the B57nd60x 10.10.0.0 driver was gobbling up CPU at a frightening rate.  However, although he’d reported the problem, at the time there was no solution and a new driver wasn’t available on the Dell website.  A year later, the driver still isn’t available – the Dell driver is resolutely stuck at v 10.10.0.0 – so, no fix.

But it’s annoying seeing your CPU running constantly at 20%.  It also has an impact on battery life.

So I looked around a little further and found an updated driver to download at the the broadcom site, for version 11.7.3.0 – surely this would have a fix, as Broadcom were aware of the problem thanks to Mark’s excellent work.

And it worked – the screenshot below shows the impact – the first third or so shows the CPU usage with the old driver, and then it drops dramatically: 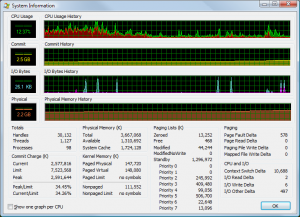 That Dell haven’t updated their driver pack in over a year is something of a support fail – it makes the XPS M1330, at least in certain circumstances, somewhat less of a great PC than it could be.  And it’s also poor for the PC community – a lot of criticism is made of Windows being something that slows down over time.  It’s rarely the fault of Microsoft – often it’s driver issues, but finding the latest drivers isn’t easy for everyone, and it’s quite technical to solve.  MS could possibly make driver management a simpler system, but the PC makers could help by keeping up to date driver packs – especially for laptops which are rarely modified.

Thank you very much, helped me, I was experiencing exactly that.

Thanks for finding the updated driver to correct this Dave.

My Dell D820 laptop was also impacted by this issue. I also used Mark Russinovich’s blog posting to confirm that my laptop’s excessive use of system CPU was being caused by the Broadcom b57nd60x driver.

I’m downloading the updated driver now. Hopefully I can get my 10 to 15% of CPU back!