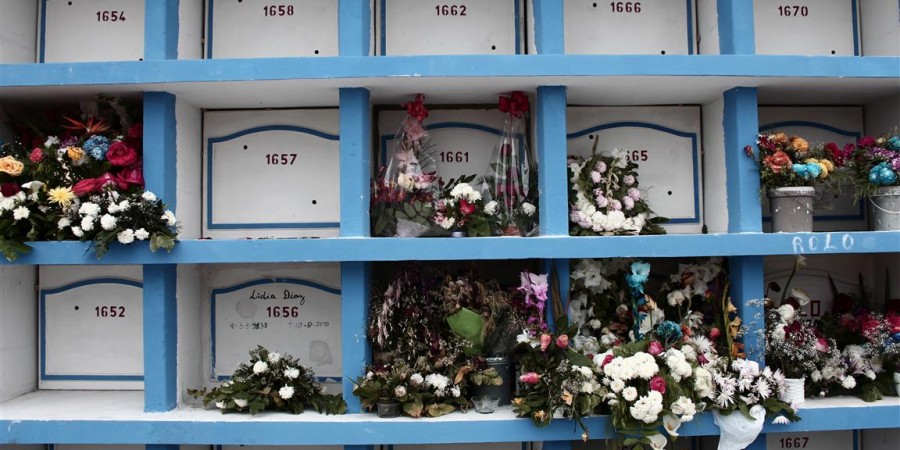 Anyone who’s experienced the death of someone close to them will know that there is often a lot to do.  No exceptions here, plus the added pressure of limited time.  However, I’m not entirely unhappy about the time thing… makes me get things done. 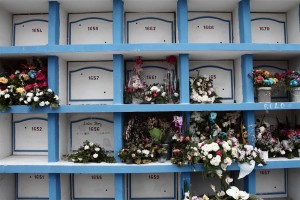 Center stage, as ever!

So, following the funeral I went yesterday to the cemetary to finish off the paper work.  The tomb is owned in perpetuity by me, although a typical arrangement, that may seem strange in Europe, is to simply rent a tomb for a number of years.  Once that time is up the coffin is disinterred and transferred to a shared grave.  I also had to sort out maintenance again, in perpetuity.  It’s not a lot each year, but with no easy way of paying fifteen pounds to an account in Chile every now and then I had no option.

I actually saw this happening on my second visit.  You could see a clearly subdued couple watching as the coffin was lifted from a tomb, cleaned up, sealed in plastic, then loaded onto a hearse.  It was a sad sight.

And it’s all made slightly bizarre by the music that’s piped into the cemetary.  If you have a funeral it does seem to be suitably sombre, but at all other times they appear to often play cheerful music for the workers to enjoy.

Piping out the tunes

It’s tricky feeling sombre and respectful when you can hear an Abba song.

Still, at father’s tomb it wasn’t so audible.

I took some photos, walked around, paid my respects, and headed back to town for a meeting with the reverend David Hucker who carried out the bilingual service.  He’s clearly a nice man, and initially refused my attempt to pay for the service.  It had to be turned into a donation to his church before he’d accept.  Given the service included a singer, I was amazed.  The kindness of people here doesn’t cease to amaze me.  We chatted about why he and his wife came here, my own background and so on.  All very pleasant.

I felt like I’d taken enough of Joaquin’s time so I decided I’d make the effort to arrange the headstone entirely on my own.  With limited Spanish and nothing more than a vague idea of where a stonemason may be, I set off.

Now, this is where you have to admire the Chilean desire for efficiency.  The hospital is at one end of a road approximately 1km long.  At the other, lies the municipal cemetary (not the one Chris is in).  Along this road are numerous funeral directors and various parked hearses, ranging from custom made examples to tired looking old American station wagons.  Given this is one of the more important routes to the hospital, I can’t help wonder if it helps reassure incoming patients.  Still, it’s efficient.

After some aimless wandering I spotted a suitable stone mason, went inside, and did my best.  On Monday morning I’m either getting exactly what I wanted, or a very rough approximation with some crazy typeface.  Let’s see.  Again, Chilean flexibility and a can-do attitude helped.  I explained I wasn’t likely to be around for much longer and that I couldn’t wait the usual week.  He made it happen. 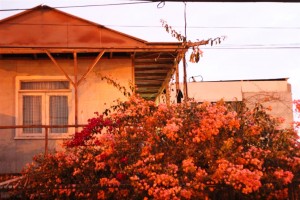 It was very dark when I took this picture of the house Chris lived in.

The next job of the day was to visit the house where my father lived.  He’d rented a room here for over ten years.

I had a real shock when the first item brought in was his suitcase.  It’s the only recognisable item I saw in his belongings – the same cream coloured Samsonite suitcase he’d used throughout much of the eighties.  It was a touch battered, but it even still carried a sticker for a hotel in Sluis in the Netherlands (a small, sleepy town once notorious for having the highest density of sex shops in the world) at which I remember him buying me waffles with cream and strawberries each time we visited on his tours.

From there on in it went a little downhill.  There was no wallet, no photo album, no sign of his early past in South America.  Apart from a couple of postcards from his days in Belgium(!) and his passports going back to the mid-eighties there was nothing.  None of my letters to him were there, nor any photos of me or any of his children.  I still have to visit another place where he apparently kept some stuff, but mostly I believe they were just things he sold on the market where had a small spot. 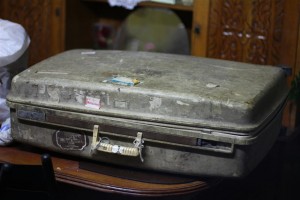 So what did I find out about him?

Looking at his passports he travelled an awful lot up until around 2006 when he broke his hip-bone in a fall during a tussle of some sort.  He’d been trading in clothes and, for a while, also appeared to be running some sort of homeopathy service.  He was buying significant quantities of remedies from a german supplier in South America whose exact location I’ll be working out shortly.  He had three books in his belongings, two of which were on homeopathy, with the other being an encyclopaedia.

The rest was mostly junk.  Old lottery tickets, some snacks he sold, a collection of out of date milk cartons, old clothes (though mostly in good condition – looks like he still preferred to be smart!) and a lot of random notes.  No notes, however, spoke of feelings, interestingly.  There was no journal, no address book even.  Just accounts of his work, routes he was taking and so on. 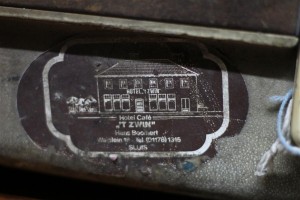 To a twelve year old, this hotel did the best waffles in the world. Ever.

There weren’t any signs of written correspondence with friends anywhere.  I did, however, find a printout with what would appear to have been an e-mail address.  So I now know that at least sometimes he went online.  Maybe he did find me after all but opted to keep quiet?  Who knows.

The house itself was relatively clean, with the downstairs occupied by the landlady and her son, and upstairs by various lodgers.  But my father didn’t really spend much time there – as had been the case when I knew him, he preferred to be out at bars or selling at the market, using his modest room as merely a place to sleep at night and to store a few things.

And that’s really it, so far.  There’s little more evidence.

After this it was off to the bars where my father liked to hang out.  He had a few acquaintances and friends there.  People he would drink and play billiards with whilst arguing about sports, politics and any other subject that caught his attention.  It’s fair to say he hadn’t changed much, in many ways. 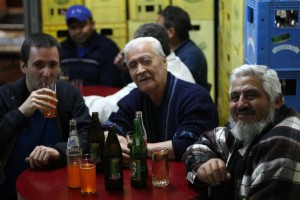 Myself, Rafael, and a guy whose name is evading me right now. I’m drinking pancho.

So we’d agreed to meet up at the pool hall and have a few drinks and a game of billiards (or pool or whatever it’s called) in his honour.

It was fascinating to sit in the places my father sat, and play the tables he’d have played at.  I didn’t get somber.  In fact it reminded me that his life, whilst poor, wasn’t terrible.  He had friends, and he had things to enjoy.  That’s a big part of what we all need.  So we drank a little, and I learned the favoured drinks of his friends – one called pancho, which is basically beer and Fanta mixed together, and another called hota which is a mix of wine and, believe it or not, Coca-Cola.  Yes, I was surprised by that one too!

Later, as I tried to encourage one particular drunk friend of my father’s to NOT play with my camera, Joaquin told me he’d a call for his mariachi band to play a serenade.  “Would you like to come,” he asked.

How could I refuse? 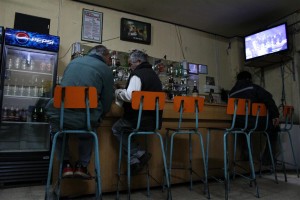 The bar and stools where he often sat

About two hours later I concluded that Chilenos are, essentially, completely mental.  But in a nice way :o)  They arrive, in their slightly too small costumes, from different directions at the specified address.  And they must keep quiet outside and not be discovered.  Because nobody expects the mariachi.

At the allotted moment they all pile into the house and the singing starts.  The lady whose 50th birthday it was seemed bemused at first, but appeared to enjoy.  Her husband, however, was a strong, surly type who looked like someone who made a living from ripping lorry tyres from their rims with his bare hands.

Still, he didn’t kill any of us so I gues it was OK for him.

And then it was off for a burger.  I was granted my wish of a vegetarian sandwich, which turned out to be a chip sandwich with salad and avocado in it that tasted suspiciously meaty (cooked on the same griddle, no doubt)… but I had to chuckle at many of them ordering nothing more exciting than a cup of tea with their meal.  Which was, of course, served in china, with a saucer.  Don’t see that much in English burger bars at 2am in the morning… 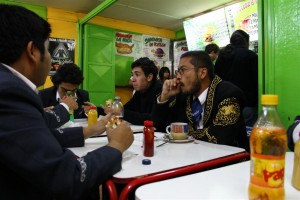 A burger and a nice cup of tea at the end of a night out.

It’s now Saturday here and I’ll admit to a slightly lazy day.  I got up late, wandered around town, had yet another terrible breakfast (they’re better in Peru, I have to say) and generally felt slightly subdued.  The day before had been quite happy, really, and now it was simply about going back to normal.  I have no tasks left until Monday, and attempts to find options such as teaching people how to create websites have failed to elicit much interest.

So I’ll go through the small bag of items I took from my father’s place, take some notes, and generally meander today.  Don’t expect an exciting post tomorrow!  I also have to decide what to do next.  I still have two weeks to use up, but no clear leads in other countries.  I suspect once I’m finished here it might just be time for a bit of a holiday.  I just need to decide – relaxed, or exploratory?  Any thoughts?

Beer and fanta? Don’t fancy it much myself!

Another amusing post…the husband who dismantled tyres was my amusement for today ha.

10 years that is a long time he rented for! His house looked better than I expected to be honest.

And in the case of holiday I would say relaxing…you’ve had a busy few months…. I suspect it may end up being exploratory though :) xxxxxx

Thanks for sharing! I read your posts with great interest!

Red wine and coke is one of the chavviest things I’ve ever had to serve anyone. Made me feel dirty.

Would love to have seen the mariachi band :)