Is WordPress Slowing My Site Down?

I don’t really look at server response times too much, because generally it’s a bit dull, really.  If our server is really sick then the automatic alerts and text messages from Pingdom tell me to get fixing.

Anyway, tonight I just thought I’d have a look at some graphs.  And hey, there’s a bit of a shock… my own site, this one here, is getting slower.  Here’s the graph: 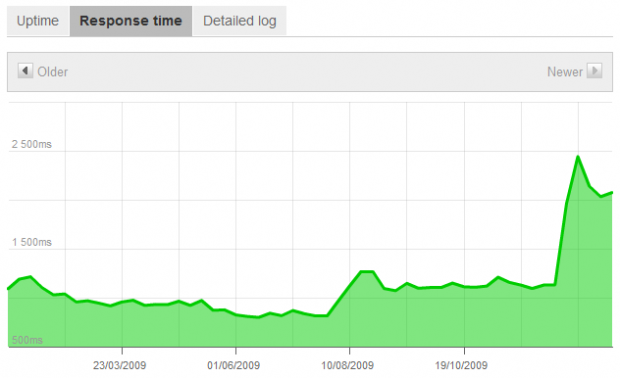 Now, what you’ll notice is that generally everything looked nice and brisk until early August 2009 when there was a marked deterioration in performance.  Then it plodded along just fine until December 2009 when it got worse again.

Is It WordPress Bloat?

I wondered what had happened to cause this – I’m especially shocked that a page load is now so slow.  I haven’t changed the theme in use for at least a year, and the plugins are generally ones I use elsewhere.  So I did a bit of thinking, and then it dawned on me when I found this list of release dates at WordPress.org:

The dates correlate exactly with the worsening performance of this site.

Now, correlation absolutely does not relate to causality.  At upgrade time I usually take a moment to review plugins, upgrade the theme, etc.  It could be that an upgrade or change to one of the many plugins in use here that has caused the slowdown.  I know it’s not traffic to my site – that’s been flat for ages, with only the occasional blip.  The server is a dedicated machine running about fourty sites that we manage, but the load is generally quite consistent and impact on different websites is fairly well managed.

But I’m a speed freak.  I like it when a website zings into view.  I love fast cars.  I love computers that don’t dither.  I love telephones that respond instantly.  So I hate that response times are now below 1s.  That’s not on!

So I’m going to try to find the cause of this slowdown – I’ll be running some experiments on this site, profiling queries, checking the database over and so on.  And I’ll document it all as a way of showing you how we at Interconnect IT do our performance tuning.  Whether I document it here or there I haven’t decided yet – I think it would make a good case study for the site.  We’ll see!  Watch both sites…

I’ll be watching this article carefully. I’ve also found that WordPress seems to be getting slower and slower.