This subject has been rolling along for some years now.  Basically the technology now exists to be able to instruct a car what speed it should travel at.

Like everything, of course, it’s not all bad.  There are plenty of good reasons for speed limiting cars, trucks and even fire engines.  That doesn’t necessarily mean it’s a good idea.

How The Pro Speed Limiters Present Their Argument 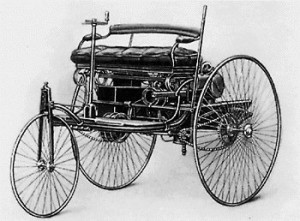 Slow, yet also lethal - public domain image with thanks to Wikipedia

There are currently a lot of fears in society, especially Western society.  We’re scared of global warming, the economy, terrorism, and dying in a fiery ball of fire when some chav in a misguidedly tuned Vauxhall Nova comes careering head-on towards you as a result of massive overconfidence and a lack of skill.  Throw those arguments into the air and you have some pretty strong arguments as to why we should introduce speed limiters.

The arguments are mostly presented by different types of organisation.  You have the emotionally irritating Brake, and the more calm but government funded (don’t forget this fact, they may sound independent but they aren’t) Motoring Forum, the UK Commission for Integrated Transport, and various other safety campaigners.

I can’t find a quote from Jacqui Smith on this subject, but I’m sure she’ll be along soon.

And The Argument Against

Well there has to be some rational argument against this, but unfortunately we’ve only got Safe Speed getting all the media attention on the other side.  Holy Fucking Shit.  I mean, really.  Have you seen them?  You wouldn’t trust these people to decorate your house, so why would you trust them with setting the agenda on speed limits and motoring policy?

Instead, why not get a psychologist who’s studied driving onto your show?  Or, at a stretch, someone from the Institute of Advanced Motorists?  But no, instead you get to listen to a  muppet from Brake arguing with a muppet from Safe Speed.  I suppose there’s only so many pundits to go round and the radio and TV stations pick the easiest ones they can find.

But here we go – this is other people’s arguments, don’t forget.  Mine come later.

Thankfully, spokefolk from the RAC, AA and the likes are occassionally wheeled out to discuss such issues and they tend to be a bit more rational and thought out.  But they’ve become rather dysfunctional resellers of insurance and recovery services these days, rather than the clubs and associations that they originally started out as.  Consequently they have to toe a fine line between keeping customers (many of whom are the unthinking fools I worry about) and not upsetting the government (filled with the misguidedly thinking fools I also worry about) into adding more restrictions to both their customers and their businesses.  So they tend towards making statements rather than take the risk of getting involved on radio or TV.

Of course, avoiding radio or TV is a sensible move for many.  I’ve listened to myself on Radio and I’m clearly a rambling buffoon who doesn’t know when to shut up and who talks over others.  Heaven knows what would happen if I found myself on TV.  Of course, it’s not totally bad to be a buffoon – look how well Boris Johnson’s done out of it.

The best argument against this, so far, comes from the easy to respect Derek Charters, from the Motor Industry Research Association, who believes limiting speed automatically could cause accidents.

“The last thing you need is one car to be overtaking and then pull back in, in front of the cars in front, because that braking event will then cause everybody to start to slow down, which will then compress the traffic, which then causes an incident.”

The Dave’s Attempt to Think on this Subject

The key arguments for or against this idea are really just noise.  The question we should be asking is at what point should drivers give up responsibility for the movements of their cars?  Lane sensing technology has matured enough that you could conceivably place your Honda at the beginning of the M6 and drive all the way to Scotland without touching the wheel, brakes or throttle again, coming to a stop when the traffic in front does so, and accelerating to a set speed when it’s possible to do so.  I remain to be convinced that all this is a good idea, but at least it’s entirely within the control of the driver – he can choose what is and is not switched on, and where.

GPS technology is constantly improving, as are sensors.  It’s only a matter of time before we can simply climb into our cars, shout “take me to work, autocar!” and climb into the back for a nap.  Sounds like a wonderful idea to me and I wouldn’t care what speed the car travelled at so long as it woke me up on arrival and neatly parked itself while I go for a pee.

Partial implementation, on a wide scale, of speed limiters or even smart cruise control could be lethal.  Each car would end up driving at ever so slightly different speeds.  Overtaking moves could be measured in miles, and it wouldn’t matter if you didn’t have a speed limiter – you’d be stuck behind those with them fitted.  And those who choose to have them fitted would be sitting in a smug pool of self-superiority, knowing they’re driving at the maximum safe speed.  They’d be wrong, of course.  70mph is safe when it’s clear and dry.  It’s safe even when it’s wet.  But in a deluge it’s lethal.  But having given up the act of thinking about speed they would just keep their foot mashed down on the carpet.  Until they eventually plough into the back of the car in front that they couldn’t see.

And that’s why this topic has made it into the Campaign for Thinking.  Full automation is a good thing, it means you can go and think about something else.  But a world full of drivers who believe thinking about speed is only for the government… God preserve us!

Now, could the government get on with thinking about things they could help us with?  Infrastructure, international security, the economy, tax… that kind of stuff?  The big, hard problems that they have the power to do something about?  3,000 people a year die on the roads.  60,000 people a year die from murders in South Africa.  And providing assistance to unstable or impoverished countries could save the lives of millions.  Unfortunately it’s hard to get elected on the promise of saving the lives of AIDS stricken Tanzanians, but you could save or dramatically improve the lives of more than 3,000 of them with the millions spent on speed limiter studies.  Yes, I know it’s a straw man argument, but a little sense of perspective on the point of all this would be useful.

I’m as a big a fan of Top Gear as anyone. But I’m entirely behind the speed limiting proposal, for one simple reason you haven’t really covered.

And it’s this. Speed limits exist.

There’s already a device in every car which is meant to limit its speed: the driver, or more accurately perhaps, his/her conscience. But he/she needs help.

Think about it. Cars are designed to break the law (ie go over 70). They are routinely marketed on their ability to break the law. And the only thing stopping you from breaking the law is the angle of incline of your right foot. A mild twitch, a matter of millimetres, and you’re a criminal: there’s no mechanical ‘safety catch’.

And, get this – to see what speed you’re actually doing, to ensure you’re staying legal, you actually have to take your eyes off the road. What do you do: watch the traffic around you, or watch the little needle on the dashboard?

There are arguments about the appropriateness of the limits in force (eg 70 on the motorway). But if speed limits are right in principle, and I don’t hear anyone saying they aren’t, then cars should be built to recognise them. I’ve only recently joined the world of satnav, and I’m amazed how accurate it is. The tech is ready to tell you what limit you should be doing, and if necessary, implement it forcefully.

An interesting response, Simon. And perfectly valid. The problem is that we have to deal with the psychology of people – they want to drive as fast as possible, and will do so. With speed limiters it just means they’ll soon get in the habit of driving absolutely everywhere with their foot mashed down on the throttle. I’m not entirely sure that’s a good idea….