2008 kinda started on a low today… We we’re doing a spot of leafleting for Romana’s French teaching today when I walked up one drive and saw a tabby sleeping near the back of a car. I dropped the leaflet off, walked back, but noticed the cat seemed rather still.

So I went back, knocked on the door of the house, where they said, simply “He’s not ours!” So I asked if they knew anyone who might own it as it seemed very sick. The old chap did make a cursory trip to a neighbour, who wasn’t in. But I was a bit shocked when he explained he’d seen the cat on his drive earlier in the day. Ah well, some people don’t like animals and don’t care, and I mentioned as much to Romana. A shame he got aggressive on over-hearing this (maybe I meant him to) but he was a daft, small old man. He even got himself wound up to the point that he threatened to knock me out. Riiiight.

Anyway, I left him and his equally callous wife to it, wrapped the cat in my jacket and jogged (well, coughed and spluttered – I have a cold) back home to get my car.

While I was gone other people in the area got talking with Romana and they tried to find if the cat had an owner nearby, but there was no joy, the cat had no collar (and later we found, no chip) so it was hard to see if he was owned.

We got him, smelly, cold, and barely breathing to the nearest open vets. He had very little sign of life except when we picked him up when he’d miaow quite pathetically So he wasn’t dead, but he was in a really poor state. 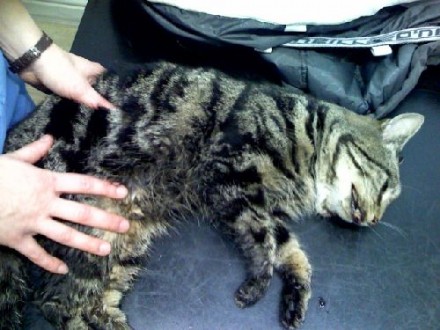 At the vets his body temperature barely registered, he was anaemic, full of fleas and in poor condition. He was quite young though, and not badly injured, so almost certainly very sick with something. He was nearly dead. They felt the best decision for him would be to put him down humanely. He was almost certainly a stray, but even if not, you could see the vet felt that trying to help him could just be prolonging the poor cat’s misery.

The picture above shows him still alive, but poorly. Bless the little tyke – and at least he didn’t die cold and alone on a damp driveway. He had people looking after him at the end.

It’s always suprising that people are so unconcerned about cats that are hurt or strays.

I spent an hour rescuing a small kitten being chased by literally every tom cat in our neighbourhood at the bottom of our road – they’d been chasing her all day and were running in front of cars. One of our neighbours kept opening her front door and screaming when the cats ran past (this didn’t help my rescue efforts). Luckily we got the cat home and off to Freshfields where she’s been rehomed!