Why You Should Be A Secularist

All these arguments about Britain being a ‘Christian’ country at heart (see Baroness Warsi here, here and most importantly here) are so much bull, and I’m tired of it.  It’s part of an attack on the growing secularist movement but framed in such a way that it’s designed to scare the religious into thinking they’re going to be stopped from practicing. 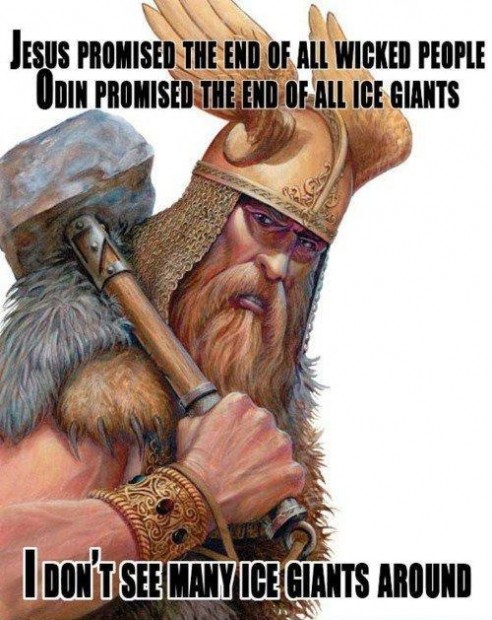 The point being, it's easy to make a logically inarguable statement that is still utterly and completely fallacious. "Jesus Saves" could be another one - maybe he does, but there's no way to prove it.

I mean, look at how we named our days of the week – there’s no “Jesusday” or “Paulsday” – no, we have Thursday = Thor’s Day, or Wednesday = Woden’s Day = Odin’s Day, and Friday = Freya’s Day.  At Easter it’s all about fertility and I don’t see many people chowing down on chocolate crucifixes.  OK, that last bit is pretty flippant, but the truth is, a lot of our culture has plenty in common with old Pagan rites and beliefs.

So if you’re Christian then that’s fine, but any politician who says that to be secularist is somehow non-Christian is like a secularist saying that being Christian, or Muslim or Rastafarian is bad.  It’s important for all to respect all our beliefs – few are provably right or wrong, but if government ever becomes about religion, or driven by religion then it causes inevitable sectarian divisions that are frankly disastrous.  Not only that, but government moves away from being evidence based to belief based.

Scrub that last bit – a lot of government is belief based anyway, even when religion doesn’t come into it.  People are like that.  But secularism is a big part of moving towards evidence based governance and away from running a country based on peculiar notions of what is good or bad based on differing interpretations of where we come from and who we’re supposed to be trying to please in order to get a decent afterlife.

I’m a secularist.  Not a militant one, but I do believe that state and church need to be completely removed from one another.  In Britain we have a curious situation where there is still a small amount of religious interference in the state – it’s almost inevitable when your nation’s leader is also expected to be the head of the church.  Currently an English heir to the throne can’t stay as heir to the throne if they marry a Muslim, for example, unless the Muslim converts.  And that, if you think about it properly, is a serious worry, because it tells people that it’s OK to consider a different belief system to be inferior.  It legitimises religious intolerance, which is bad for all of us.

So let’s keep pushing for a secular state, and let’s encourage religious freedom.  I’m not going to reveal my religious beliefs here, but I’ll support yours.  Unless, of course, they’re based on intolerance – in which case, time to take a hike.

Secular state and secular education, please. I’m really not happy about putting my kids into religious schools. I know there are SOME State schools but in my opinion all schools should be secular providing high standard and religion-free education. Religion should be in the church, not in school.

You’re right – it’s shocking that there are more religious schools in our area than secular.  They’re all funded by the state anyway, but I guess the process of disentangling will be a long one – cultures don’t change quickly, sadly.