The Liverpool Riots Do Not Indicate That Our Society Is Broken 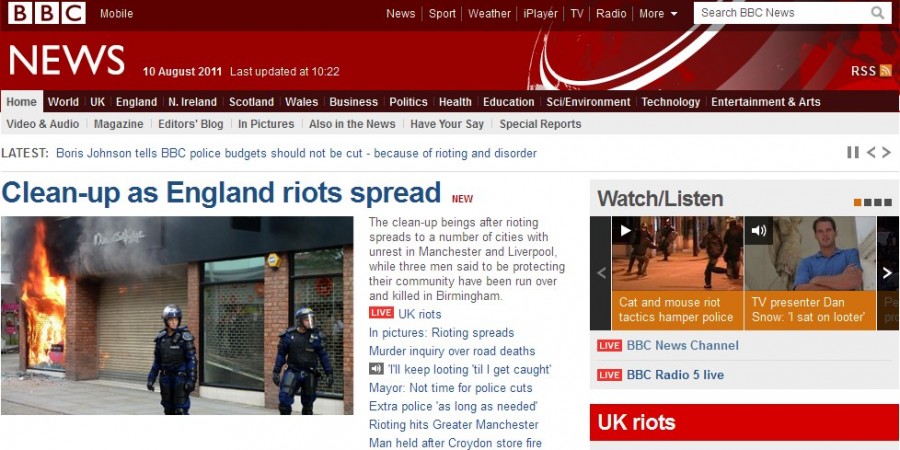 Ok, the riots matter.  Especially if you’re unlucky enough to have had to face rioters in your district, near your home, or near your business.  In fact, the riots and disturbances are full of tragedy, deaths and ruined lives.  They are, frankly, horrible.

And strong action is needed to stop it turning into a joyfull rampage for our criminal underclass.

But what they aren’t is some kind of protest.  They’re a laugh.  If I didn’t have much to lose I suspect I might even find the thrill of a riot quite an attraction.  And in areas where there’s possibly not much to do if you’ve got very little money then I can quite understand the fun, the empowerment of feeling that police won’t stop you when they usually do.  Thing is, what nobody seems to be saying is that the number of people involved is tiny.

Here’s a thing – the number of people kicking off in the Liverpool area has been reported as approximately 200.  In reality that means anywhere between 50 and 500.  But let’s assume that 200 is correct for now.  That’s a whole 0.0245% of the population.  Another way of looking at is that that 99.975% of the population in Liverpool didn’t feel compelled to smash anything up or set fire to cars.  I daresay the proportions around London are similar.

So actually, society functions well for almost everybody in it.  In fact, given that 45,000 18-20 year olds are indicted of a criminal offence in a year (sample from 1999) you can see that even the vast majority of young convicted criminals aren’t interested in rioting.  The numbers are so small that you can’t say that this is a problem with a consumerist society, a problem with poverty, or a problem with our culture – the sample size is too small.  It’s probably just some yobs getting the upper hand on the police and having some fun.

You can stop almost all riots.  All you need are an awful lot of police who aren’t scared to intimidate and bully their way through trouble.  It works.  Riots are rare in police states, for example.

So we need to ask if we really want brutal police officers?  What about when they’re not dealing with a riot?  They’re going to be the ones your son deals with when he gives a bit of cheek to an officer after being told off for cycling on the pavement.  They’re going to be the ones potentially wading in too early during an otherwise peaceful protest.

We must come to accept that these occasional moments of unrest are, unless repeated again and again with significant economic damage, a relatively small cost of living in a relatively free society.  Just as we mustn’t allow the few terrorists with religious agendas to change how we live, we mustn’t allow the few thugs out there to change the way we deal with protest and the way we run our cities.

Of course, the cost mustn’t be borne by the individuals and businesses affected – if our society is to accept this, it must also ensure that nobody is left harmed or significantly out of pocket by this either.  We need to be humane and adult about it all.

What we certainly don’t need is to start pressuring our politicians into making some dumb, knee-jerk changes that will take away our hard won freedoms.  Let’s take stock, let’s maybe ask for police to be a little smarter in apprehending the rioters, but let’s not give up and change too much.

At last some perspective- yes it was awful – absolutely uncondoneable but we need to be vigilant about protecting civil liberties and human rights against being eroded to counter a thankfully rare occurrence.

where did you get 816000 population of Liverpool from? I think the population inside Liverpool city council borders is about 450,000 and ‘Liverpool Urban Area’ is 1.something million.

okay sorry it was Liverpool Urban area. my mistake. i don’t think you should count St Helens as Liverpool though and i’m dubious about Haydock and parts of knowsley.
good article anyway.

i was just thinking, if you take an area like Tottenham or Hackney, what % of 16-20 year olds or 16-24 yr olds rioted? it might be quite a bit higher than 0.02%. if its more statistically significant, then in those areas in could be something to do with poverty or culture or morals or values or authority or whatever.

Hi Steve – I’m not too sure. And it may well be that there is a significant percentage of folk around who would enjoy a bit of a riot. I suspect there are. But the numbers are still small. The harsh sentences being handed out may well act as a deterrent to future potential rioters. Time will tell.

Hi David
It seems like a rather gray area to me. What’s enough police presence without being overly heavy handed? When we want people to live in downtown areas where the riots are mostly likely to occur how do you protect them and their property?
I also think that those who did the damage should pay in some fashion. If not monetarily then by community service work.