A bit slow putting this one up, but it needs doing!

It was an unusual day for me, in part, because I’d not really expected to be competing! I’d really given up on this season – with a shortage of funds and time while I continue getting my business on its feet (it’s at http://www.interconnectit.com visit it, it’s great!) I’d cut back my motorsport involvement to the very basics. However, before I’d made that decision, back in April, I’d already entered for this event.

Completely forgotten, the event drew closer and I only realised I was entered when I was volunteered for passenger rides to Juice FM prize winners! I responded that I’d be happy to help, but couldn’t as I didn’t think I was there. Reassurances that I’d entered quickly came back so, with just a week left, I quickly tried to get my car working and ready for motorsport!

The day itself was one of those where I never felt as on form as I should. A lack of circuit time certainly didn’t help, but I quickly set at 53.01 time on my first run. Problem was, I couldn’t really improve on that. David Marshall in his potent 205 GTI was all over my times and a win wasn’t assured. Gary Thomas, who I can usually rely on to push me in this class had moved to mod-prods due to running semi-slick tyres. Even he, however, failed to break his own Elise record in spite of the great tyres. I can only assume that the windy conditions didn’t favour the lightweight and relatively low powered Elise. Eventually, on the last run, I managed to pip David Marshall by 5/100ths of a second! On the final ‘fun run’ I went quicker again, experimenting with some lines and being aggressive with the kerbs, but still over a second slower than my personal record.

The picture below, incidentally, was taken by Gary. He’s now making available his images through a quick and simple online gallery application I helped him set up. Online photo galleries can be something of a nightmare, especially if you’re trying to sell the pictures – eCommerce systems don’t work well with large numbers of images, and Photo Gallery systems don’t do eCommerce very well. However, in spite of that I think we did a nice wee site, and the pictures are great – if you want photographs from sprints and hillclimbs, he’s got some great examples at yourftd.com. 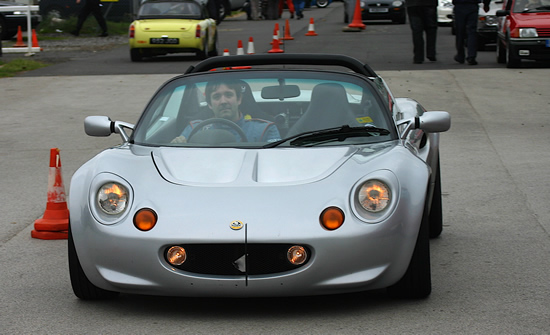