Yes, this really is my first event of the year! It won’t be my last, but sadly business and finances have to take a priority and it’s unlikely I’ll be doing much sprinting this season. I’ll do the odd track-day, however, to keep my eye in.

And it didn’t really go well – at a trackday at Aintree the week before, a start-of-season shakedown for me and the car, I quickly realised that my car’s handling was evil. I don’t mean evil as in a little tricky at the limits, but evil as in “I think this car wants to kill me” evil.

It all started off harmlessly enough – driving there, having not really touched the car in months, I thought to myself “These Elises are skittish aren’t they?” And guessed that I just needed to ease in. However, on going out I knew I should be at least as quick as another chap in his Exige. And I wasn’t. In fact, he was gaining on me and, as we rounded Bechers, the back-end of the car let go quite dramatically. Given that my nature isn’t to spin very often, especially at this point in a corner, alarm bells started to sound.

I carried on, but as we bounced out of bumps the truth dawned on me – I had a damper problem. So I gave up before having an accident, looked under the back of the car and, sure enough, the left rear damper was dribbling oil.

So for the day I gave it up, went home, got into the tow car, and tracked that instead! And I can safely say that a Saab 9-5 Estate is a rubbish track car. Not slow though, and bowling along in near silence, with aircon and Radio 4 on is quite pleasant even if it is quite difficult to follow an Archers plotline and clip the apex at the same time.

So moving on to Anglesey, and the first sprint on the new layout… well, here we had a problem – the dampers didn’t return from Nitron until Saturday morning (but credit to them for the rapid turnaround) and I had to skip that day. However, the second day was my chance to show some mettle – albeit in an Elise only class of just four cars – including Gary Thomas.

So it’s a shame that the front left damper decided to fail.

The effect was dramatic – at first there was an obvious pattering from the front left under load, but the problem really came if you found yourself sideways – that undamped spring unsettling the car considerably and causing me an enormous tank slapper.

All I can say is that I did my best. I managed to come in second, behind Gary Thomas’s always strong pace. I was pretty much in that place all day, with Lee Cliff, a relative rookie, trailing a good few seconds behind as he continues to learn the ropes.

The circuit is a cracker – beautiful views, and now blessed with a top-class surface and layout. They’ve really come up trumps on the track and I’m looking forward to many more great events there in the future. If only more sprint circuits were like this. 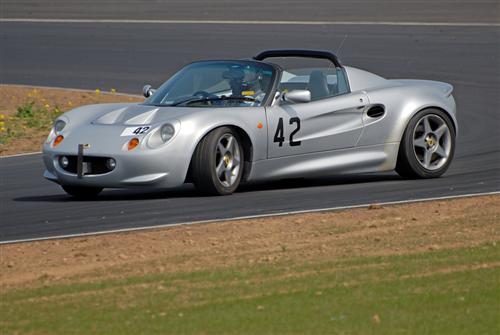 check out “Panic in the Footwell”

and “Panic in the Footwell 2”

See you at Aintree where i have an apointment to eat your dust :(

Hey, I think you have my old Lizzie! Just stumbles across you in the old BBS – would be nice to say hi to her again if ever you are passing through Bolton :*(

I’m afraid it’s not your old one Jay… I bought mine from its first owner, a chap called Neal from darn saarf. Completely standard and carefully looked after – in stark contrast to what it is now :-)

Ahhh gutted, nevermind, one day we shall meet again :(