The traveller on a budget faces the very real problem that airlines employ differential pricing depending on where you are.

Here’s the UK page for a one way flight, with the otherwise excellent LAN Airlines, from Lima to Tacna in Peru: 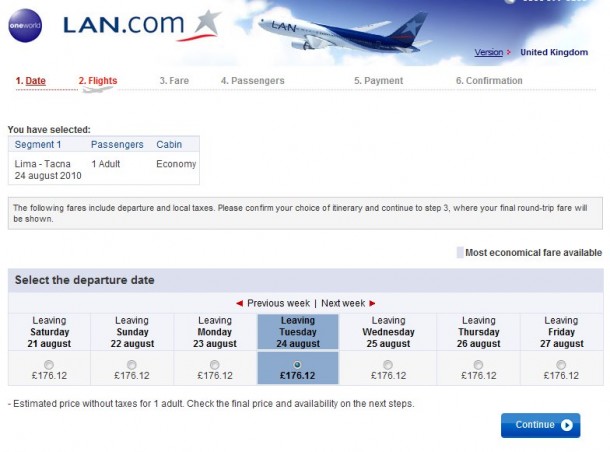 And now, the price if you go the Peruvian version of the site: 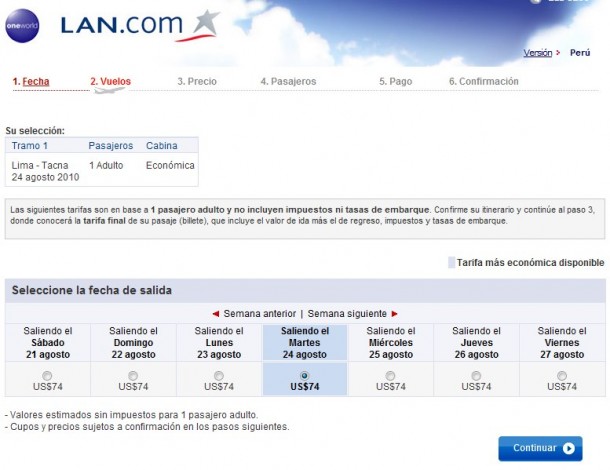 Now, I know your average Brit makes considerably more money than your average Peruvian, but here’s the thing – if a McDonalds in Lima had two price boards up and the European one had prices three times as high you can imagine how that would make the average customer feel.  I have actually seen this, where an English menu and a Spanish menu had different prices (and why it’s worth learning the local lingo at least a bit) but over 3x is bonkers.

Now, let’s see if I can book through the Peruvian version of the site.  If they block me I’ll just have to call a Peruvian travel agency.  Simple!

It also makes me wonder – had I been flying Lima to Liverpool and back, rather than the other way around, how much less would KLM have been charging?  It almost makes me think of Adobe.

If you click through, you get the following message on the Peruvian site:

In other words, don’t even think about it!  The price is available only to Peruvian residents.  The cheapest price otherwise is a good $80 higher.  Still a lot cheaper than the Brit price, however.

I suppose I could try another airline, but I once had a flight on a plane that was condemned soon after following safety ‘incidents’ when I flew on a Peruvian budget carrier, so I’m not wild about shopping around too much just yet.