There’s enough in the video to convince anybody, but I’ve decided to add my own few thoughts.

As long as the military culture exists that allows this to happen, then the West can never consider themselves superior in any sense, nor can we ever expect peace in the Middle East or the cessation of Islamic terrorism.  What happened was murder, pure and simple.  The airmen acted as judges, jury and executioners. 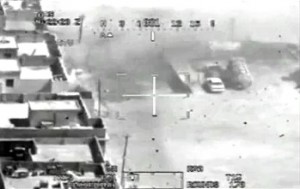 Just after the start…

I felt sick.  You probably will too.  I know that this post won’t reach the eyes of anyone in a significant position of power, but if I show it to you, and you show it to some more people, then we can be a tiny part of what will put pressure on the US military authorities to properly investigate this video and explain fully what happened.

It would appear that, perhaps through a state of heightened tension and military paranoia, that any grouping of individuals in Baghdad could become targets.  With nobody taking real care to check what was actually happening the killing of innocents, including two children, was inevitable.

But what really really made me angry was the way the airmen talked like teenagers playing a video-game.  They described the scene as ‘nice.’  They were please with their blasting apart of a van that had been trying to help rescue the wounded.  Their descriptions of the people they were watching didn’t for one moment suggest they were dealing with people or individuals.  People with children, parents, lovers, dreams and ambitions.

There are, I’m sure, a great many in the military who’ll be appalled by this video.  Let’s hope they can encourage Thinking amongst those who appear to have detached themselves from any sense of empathy.