What Happens at Your First Sprint or Hillclimb

The first event you ever do is a great experience. Don’t make yourself sick with worry, and ignore the people making fun of you and suggesting you’ll go out in a big ball of flames or similar! Accidents, in particular serious ones, are rare in sprints and hillclimbs, and if you take it easy while you learn they shouldn’t become a problem for you. At the end of the day, you’re doing this for fun!

You may have already read my article on competing in your first hillclimb or sprint. This gives you the lowdown on how to prepare yourself and your car.

To enter an event you’ll probably have been sent an entry form by your club or championship – however, not all clubs send out entry forms and you may need to download them from their website.

Once you’ve entered an event you’ll generally receive what are called the ‘final instructions’ for the event. These will show the entry list, information about times things happen at the event, and depending on the club there’ll be other information such as where you can park, places to stay, what facilities will be on site, and so on.

Most events have their driver’s briefing at about 9am. Personally I like to arrive by 8am so that I’ve had plenty of time to find my bits and pieces, fix my numbers on, sign on and maybe enjoy a cup of tea. I don’t think it’s good to be stressed or in a rush at a motorsport, especially your first one. 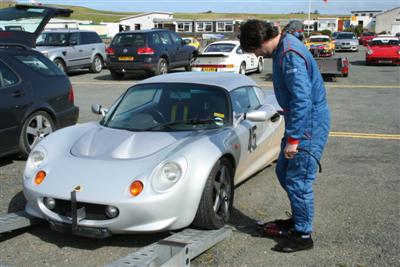 Once you’ve unloaded your car (if it’s on a trailer) you’ll generally need to sign-on before your car is scrutineered. For signing on you’ll need your race license, club and championship membership cards and a warm smile. Don’t forget that if you want to upgrade your license for higher level events you’ll need to leave your license with the stewards for the day, and collect it at the end.

Now, the scrutineers are busy at this time of day so it’s a good idea to be as nice to them as possible – most cars will have something minor which may generally be unimportant but if you annoy the scrutineer he can usually make your morning difficult! These guys are volunteers and have to be up very early to do their job…. They check your car for safety, looking for anything that could hinder rescue if the worst happens, that could hurt you, or that could fail and cause an accident. They’re also looking to see if you’ve followed the rules. One of my tips for making scrutineering painless is to make the engine bay of your car as clean as possible – if it’s badly presented they’re more likely to go looking for problems.

Once the scrutineer is happy (and usually they are!) he will give you a sticker for your car which shows it’s been checked. Place this somewhere easily visible like the top of your dashboard, door sill or roll bar. You won’t be allowed to compete without this sticker.

Depending on the event and club, there will usually be a drivers briefing, and there will always be one for new competitors. This will usually cover any peculiar aspects to the way the event is run, as well as advice on tricky parts of the course. There may be an additional briefing if you’re new to the venue.

And now you’re ready to compete!

This is, of course, what you’ve come for. First of there’ll usually be two practice runs during which you can assess the layout of the course. You may as well take it easy during these runs as the most important thing is learning where you can go quickly and not actually going quickly! Setting a record time isn’t important.

When your class is called out it will usually be announced over the tannoy. A steward may also arrive to usher you out. At most events it helps if the cars are in numerical order when lining up ahead of the start. Again, stewards tend to assist, but do what you can. Drive slowly in the paddock, get in order, and watch for instructions. Normally you’ll have the ability to follow a car in front, which can help.

At this point nerves may start to kick in. But do your best to relax. At the same time, try to visualise the circuit as best you can. As cars leave you’ll move forward in your queue. This time is also good for warming up your engine.

As you reach the front you’ll find yourself approaching the tyre warming/cleaning area just ahead of the start line. Here you can spin your tyres and brake hard in order to warm up those tyres and clean off any muck acquired in the paddock. Given that some paddocks can be pretty dusty or muddy this is surprisingly important. Give the tyres a good spin if you can, and then break hard. If you have enough space you can do it again. Be careful to stop before the end of the warming area.

Now, as the tension builds, you’ll move forward to the start line. The start line marshalls will gesture you forward and, once approximately in place, you will depress the clutch so the marshalls can line you up with your strut just breaking a timing beam. A second beam, just an inch or so ahead, will trigger the start of the clock.

In front of you now there’s usually a red light or board. Once the course is ready you will then always get a signal to Go! It’s often a green light, but may just be an electronically controlled green board. You can then leave in your own time. The clock won’t start until you break the second light beam. If you have a dragging clutch it may be beneficial to leave right away anyhow as your car might have moved forward slightly and started the clock.

And start! Do those first practice runs, check out the course, and then come back to the paddock. At most hillclimbs and some sprints you’ll be held in a holding area as you need to use part of the course to return. It’s important to complete one practice run or you won’t be allowed to compete. If your car can be run in different layouts (eg, a removable hardtop) then you should compete in both if you want to have a choice – unless you have agreement from your class rivals you can only compete in the state you practiced in.

Following practice there may be a break, quite possibly for lunch. It depends on the time and how the club runs its events.

This is where it gets exciting and the tension reaches its climax. You’ll have at least two or three competitive runs. At some events it’s not unknown for there to be as many as eight – but that’s rare. It’s also normal that only the first two or three timed runs actually count for awards.

So… the competitive runs are managed in exactly the same way as the practice runs. But this time it’s for real. I find that while waiting it’s useful to close my eyes and visualise my run along the course. This way I feel like I get more practice time. It’s hard to do, but I think it’s incredibly important and lets me become quicker, sooner.

Between each run I think it’s important to check over the car, even if only visually. It’s especially important if you were rough over any kerbs, or left the circuit. Look for anything that might have come loose in the engine bay (at my first event the battery went flying into radiator!) and give the tyres a visual check. I don’t believe in too much fussing, but do what works for you. It’s also a good time to chat with your rivals – most are friendly at these events but there’s a ribaldry and joshing in there too… don’t take all advice and joking too seriously. Especially if it’s from Gary Thomas!* If someone says a certain corner is flat out then it may well be for them, in their car – but it might not be for you. Find your own limits.

Don’t get too excited – there’s no money in this part! Some awards are nice and well worth showing, some are a bit tacky. But no matter what, that first time you receive a cup, plaque or strangely shaped piece of stone will be in your memory for ever. Most events give prizes down to third place in each class, but it does often depend on the turnout. Usually this is described in the regulations.

And now, completely tired, you can go home. Or if it’s a weekend event, go and party with fellow competitors, get drunk, and try to compete the next day with a hangover!

To help you along, I’ve created a checklist of items that you must have with you at each event. You can find it in the Motorsport/How to section of this site, or simply by clicking on this line.

hi, we,d like to get a car log booked (modified peugeot 205) asap but finding it near impossible to get hold of a scrutineer in the notts area who could , or to be more precise wants to!!
–regards /thanks
anyone!!!!—————–guru7001@hotmail.com